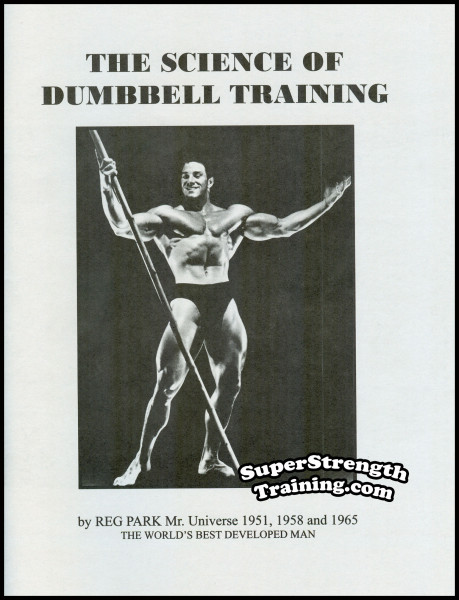 In 1953, Reg Park set a British Professional Heavyweight Weightlifting Record with a Standing Dumbbell Press of 258 pounds, in the Strict Military position!

What makes this feat, equally astonishing, is that this record beat the old one of 235 pounds, which was previously held by Park!

This should give you some idea of just how important the Reg Park felt about training with dumbbells.

If you have used barbells for most of your weight training, or have never used dumbbells, exclusively, you will be amazed at the results you will obtain from this method of training.

Why Use Dumbbells in Your Weight Training?

Weight training with dumbbells is far different than that of barbells.

While training with barbells, each arm and side of the body has the advantage of assisting the other.

That is, each side works in tandem with the other.

However, when training with dumbbells, this “team effort” is lost and a feeling of awkwardness will occur, at first.

This is where the important “stabilizer muscles” come into play.

You will feel soreness in these muscles the next day after a thorough workout with heavy dumbbells.

In addition, the use of a pair of adjustable, plate loading, dumbbells can be far more convenient than that of a long handled barbell.

Dumbbells can be used in the small confines of an apartment, in a bedroom, or a den, etc., and
be conveniently stored away in a compact area such as a closet, footlocker, etc.

In addition, they can be easily transported in the trunk of a car and used while traveling, on business or vacationing, in a hotel, etc.

In addition, Reg Park was the idol and mentor of 7 time Mr. Olympia, Arnold Schwarzenegger! Arnold spent a lot of time with Reg over the years and considered him to be one of the best bodybuilders of all time.

Reg Park was the FIRST bodybuilder and the SECOND man in the world to Bench Press 500 lbs.! At the “1957 Pro Mr. USA”, Reg Park Bench Pressed over 500 lbs. in STREET CLOTHES!

He carefully arranged the special exercises in each training schedule to provide the trainee with maximum benefit.

Here is an outline of what you will learn from Reg Park’s unique dumbbell training course:

Read What People Say About:
“The Science of Dumbbell Training” by REG PARK

“I remember reading copies of, ‘The Reg Park Journal’, when I was a young lad. Good, sound, advice. His dumbbell course is well done and should get great results!”
Alan S.
Yorkshire, England

“Thank you for the, ‘The Science of Dumbbell Training’ by Reg Park. I’m glad to add this to my ‘REG PARK Library’ of training books. As usual, you have done a great job!”
Robert P.
Reading, Pennsylvania

“Hi Bill. Thank you for the fast delivery of, ‘The Science of Dumbbell Training’ by Reg Park! I’m a beginning weightlifter and have not used my dumbbells, a lot. I plan on testing them out with your new course. Thanks, again!”
Roderick P.
New Brunswick, Canada

“Thank you for the order received, today. I immediately opened, Reg Park’s, ‘The Science of Dumbbell Training’. Excellent training advice along with two great dumbbell programs. I will let you know how these work out for me.”
Stanley J.
Virginia Beach, Virginia

“Thank you, Bill, for sending along my order of, ‘The REG PARK Collection.’ It is amazing, that after all these years, REG PARK is still well known over here. The old guys in the gyms tell many stories about him. I just read over, ‘The Science of Dumbbell Training’, and plan on starting it soon.”
James M.
Glasgow, Scotland

To learn and utilize the training methods found in Reg Park’s famous course, only a few pieces of equipment are needed.

A pair of adjustable plate loading dumbbells, a flat bench, and an incline bench.

Once you have set up your gym, you are ready to begin your 4 month journey to increased muscular size and a noticeable increase in overall strength.

P.S. A classic course! The training methods found in this course helped catapult Reg Park to become the top bodybuilder in the world for decades!

The Production of Muscular Bulk by Michael J. Salvati by Michael Salvati 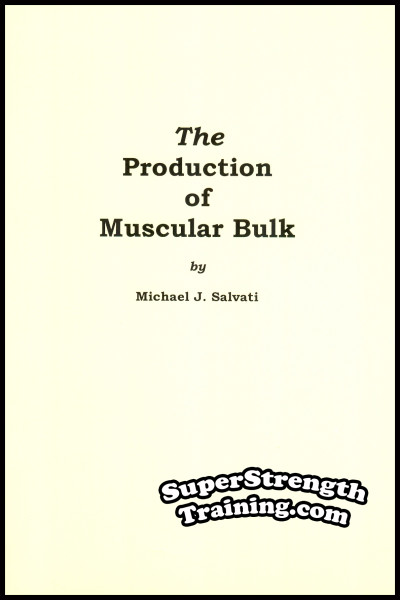 There are no secrets in gaining muscular size & strength, but some methods are far more result producing than others. The author has spent many years studying the most effective exercise and nutritional methods used by champion gainers. Read More!
Physical Training Simplified by Mark Berry by Mark Berry 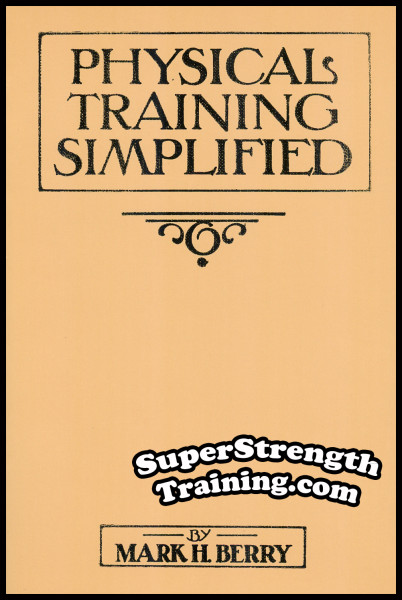 Published in 1930. A mammoth contribution to the Iron Game by famous weightlifting pioneer Mark Berry. Thirty chapters on training with barbells, dumbbells and kettlebells to build a rugged physique. Complete Bar Bell Course; The Five International Lifts; etc. Read More!
The Master Method of Health, Strength and Bodybuilding by Willoughby and Hinbern by Willoughby and Hinbern 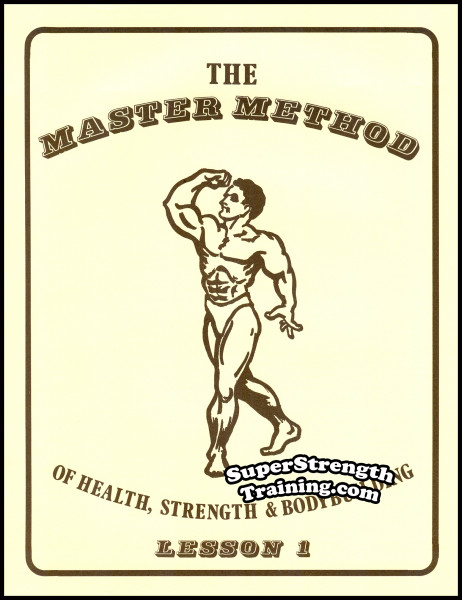 The most complete, scientific & informative 10 lesson course on bodybuilding ever offered. Simply written, loaded with illustrations, to teach you progressive resistance training. An encyclopedia of exercises for maximum results. Read More!
The Truth About Weight Lifting by Alan Calvert by Alan Calvert 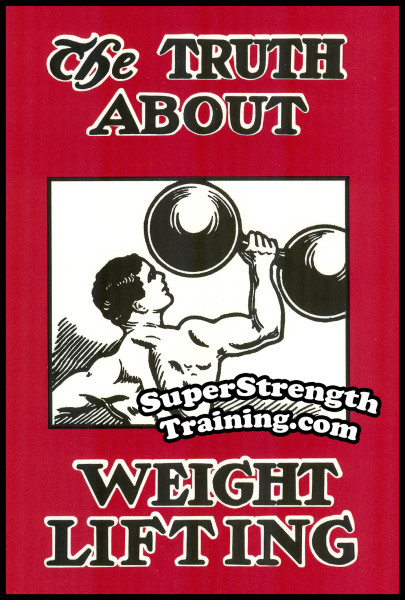 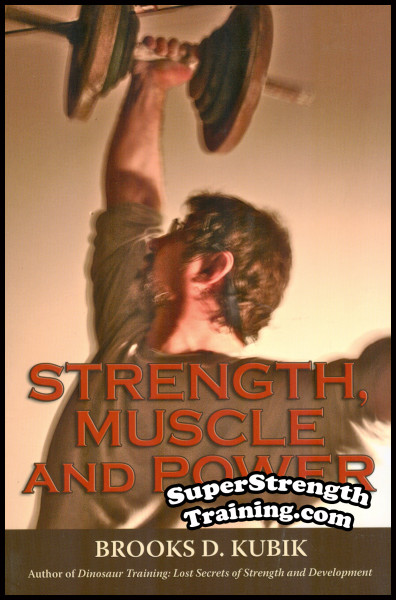 I consider this book to be the follow up to “Dinosaur Training”. A collection of 28 of the author’s favorite strength training and muscle building articles that originally appeared in “Hardgainer”, “Milo”, and “The Iron Master”, from 1991 through 1997. Read More!
Muscle Control by Anton Matysek by Anton Matysek 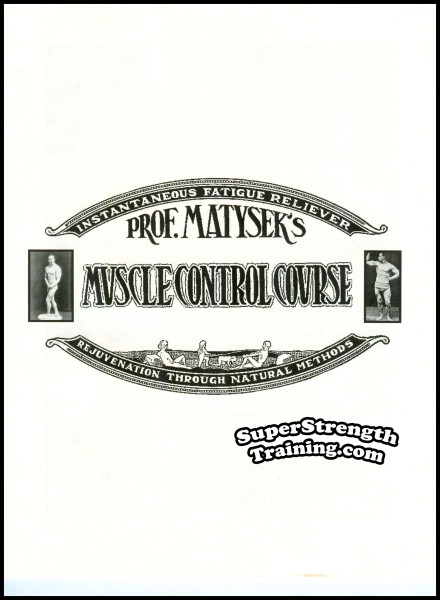 The author won Bernarr Macfadden’s “America’s Strongest Man” contest in 1922. He was a world renowned strongman featured month after month in Alan Calvert’s “Strength” magazine, books, and courses. Learn complete relaxation and concentration to enable you to control every muscle of your body. Read More!